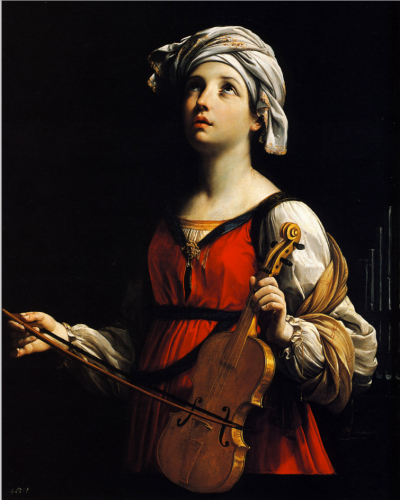 St. Cecilia by Guido Reni. St. Cecilia is known the world over as the patron saint of music. It may come as a surprise to learn that she was not a vocalist or an instrumentalist, but that her gift for hearing the pulse of God alive in sacred music led the Church to view her as having a musical vocation.

The creative process is rarely linear. So, too, with the spiritual life. In the final days of 2017, as I began a two-month fast from all social media and news, my friend singer/songwriter Blake Flattley asked me if I’d help him write a liturgy. I had no idea what part of the writing I was supposed to be responsible for. “You mean like hymns?” I said. “Oh, no,” he replied. “I’ll just rearrange some old public domain standards. I just want you to give it shape and vision and write the in-between parts and prayers.” I found myself oddly disappointed. I think I’d already started wondering what it would be like to write a hymn.

During that same stretch of time, a neighbor returned an electronic keyboard we loaned them for piano lessons; it was a hand-me-down from my mom for our own kids, who never played. I found myself gravitating towards those keys, noodling a bit, trying to recall the scales I’d learned in a semester of Piano at SMC a decade earlier. I pondered the problem of an opening hymn for the liturgy Blake and I had decided to call Fear Not!. No old standard said what I thought it needed to say, what I was certain people needed to hear. Then one morning in the shower, there they were: just the right words. They came in the form of a melody, a first verse and chorus.

The seeds of new music had been planted.

That same month, without warning or preparation, I found myself enrolling in a 2-year intensive training program of Christian Formation and Spiritual Direction. We took a field trip to the Getty Museum our first week. My cohort was supposed to be pondering a massive, chaotic painting but the art felt too noisy and not at all what I was in the mood for. I found a warm slab of Travertine outside and lay down to rest in the January sun. It was then I heard the second song: Enter Here. I recorded it on my phone. I sang it with my warbled chant-like voice to the group that night over wine and cheese. For the next two years, I sang Enter Here in my mind and car, certain that somehow, someway, some day—even though I didn’t sing or play an instrument—that I would end up giving birth to it.

I didn’t realize then, but God was already showing me the way back to my very own heart.

You see, ever since I finished my MA in Theology I’d been writing a lot of head stuff. Good head stuff, helpful and much needed, I think. More interesting and fresh than a lot of theological work. But it was not the work of my heart. Last year, I threw myself into a new memoir—hundreds and hundreds and hundred of pages written then excised. Hundreds and hundreds and hundreds more, all in search of that heart-voice that ran like a pulse through my first book Baptism by Fire and my first liturgy, The Renaissance Service and Elijah & the SAT and happy are those. But that pulse was not in this memoir. Or maybe it was just buried under the weight of too many moments. Either way, it wasn’t working.

So I put it aside and, once again, I waited prayerfully. Expectantly. Wearily. Trusting that God would not fail to grant me the desires of my heart.

The beginning of our stories begin long before our own earthly lives, but I’m going to mark the start of this one here: it was a perfectly ordinary summer day—July 26, 2019 to be exact. I looked out the window of my little home office and saw Phil Cordaro pulling up across the street from my house. Cordaro, as in “heart.” He was not there to see me; he was there to give one of the kids on our cul-de-sac a piano lesson, just as he’d been doing for 15 years. Without forethought or plan, I found myself leaping out of my desk chair which toppled as I fled the room, through the house, out the door, and across the street to catch him. “Phil,” I said, startling him through the driver’s window. “Do you teach adults? Could you teach me to play, like, simple Taize chants, and maybe enough to do some basic composing? Some theory, I guess, and notation, or whatever I’d need to be able to write a song?” 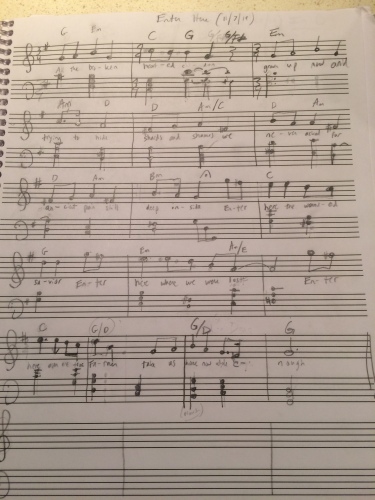 By the time I graduated from CFDM with seven other dear souls that fall, I had already wrestled Enter Here onto the page of my new manuscript notebook. Our final graduation gathering was at a retreat center in Santa Barbara. The cohort was asked upon arrival to put on a simple “gathering” in the chapel. Somehow I knew that Enter Here was meant to be an offering back to all those who’d been with me when I first heard it—a coda for our shared journey. I sang it acapella and all my dear spiritual direction friends joined in on the chorus. It was a kairos moment, to be sure. One that would sustain me for the the next several months, which were some of the hardest and most traumatic of my life. Two weeks after that perfect moment in the chapel, my 26-year-old daughter Remy, who developed epilepsy in her late teens, would return to the hospital for an intensive, invasive and prolonged depth-electrode study to prepare for a subsequent brain surgery. Throughout all those long hard days, I began to hear the whispers of a new song about the arc of her life and mine thru the lens of those hospital corridors. It would be called Full Circle Day. More songs came soon after and I began to understand that they were meant to be an album. His album. Seven songs that God had gifted me. I would “birth them” by asking different musician friends who have been important to me in different ways throughout my life each to record one that I would choose especially for them.

And so Life in the Key of God found its voice.

If you never knew just how infinitely creative and life-giving the God of all Creation is, now you do.