Man Turned In On Himself

Nothing clears a room faster than the word sin.

But denying sin’s existence doesn’t make it go away. And without the recognition of sin, the gift of grace means nothing.

So where do we start? How can we even talk about sin when it’s linked like a keyword to leeches and bloodletting and Da Vinci Code drama, to hateful zealots, hypocritical priests, or wagging fingers all worked up about sex? Well, we might want to try this. Homo incurvatus in se. Man turned in on himself. Sin as the slippery slope of me, me, me. As the roiling sea we each contribute to and are then forced to swim in—us in our hoodies with our ear buds in, blocking out any and all input that does not delight or serve us, perpetually curving in on a world of our own creation. This Renaissance-era teaching put forth by Martin Luther nails the zeitgeist of our modern era. #ManTurnedInOnHimself. Deep in our hyper-individualistic hearts, we turn towards the sound of it, the truth of it, longing to find some answers there. Or maybe even something like grace.

That America is a monument to individualism is not news, but increasingly we can see the cracks: isolation, depression, apathy, anxiety, narcissism, addiction. Where once there was purpose, confidence, belonging, and hope, now there is more of a gnawing void. Now we trade in the town square for laptops behind which we disappear, hide, seeking to dwell unchallenged in worlds of our own design, ideology, ambitions, pleasures, secrets, shame, terror. We are masters of our own free will, but still we cry out in the dark each night, “who will rescue me from this body of death?” (Romans 7:24)

Man Turned in On Himself gives shape to this brokenness. Just picture a body curved in on itself—in the fetal position, say. The shape of the curve protects and defends the thing it is turned in on, guarding it and the right to have it to oneself in the secret shadow of the curve. It also creates a barrier between the heart’s desire and the things it wants to keep at bay: judgment, change, help, love, God. When man is turned in on his own desires, the world—despite his best efforts to the contrary— becomes smaller and darker. Without access to any power greater than himself—and with the sudden realization that he is, in fact, only human—he becomes trapped in the “hamster wheel” of his own thoughts and enslaved by his own feelings and desires.

Is it hard to imagine, then, that this perpetual incurvatus state would lead us to create—and be subject to living in—a nation where, over the past 30 years, anxiety disorders have increased by 1200%? According to the World Health Organization, America is, by a wide margin, the most anxious country on earth. If you don’t personally struggle with anxiety, it is a statistical certainly that someone in your inner circle does. And nearly half of those who suffer from anxiety will, according to Andrew Solomon, develop major depression within five years.

So what does all this anxiety have to do with sin? Well, let’s go back to the beginning. (Even if you don’t believe in Creation, the lessons still hold). In the Garden, God tells Adam “to guard, protect, keep safe, watch over, keep vigil.” According to Robert Kellemen in Anxiety: Anatomy and Cure, vigilance is the “God-given emotion to respond to a threat, and the constructive concern for the well-being of others.” In other words, vigilance is a good thing. It’s a gift from God. Ok, so now let’s take God out of the picture and what do we have? 320 million people waking up in America every morning still wired for vigilance but determined to be our own God.

Vigilance without God means manically scanning the horizon for threats or opportunities with no reassurance that we are under the care of a benevolent Creator, that justice will prevail, or that our neighbor is anything more than a competitor in a zero-sum world. Vigilance without God leaves us with this felt truth in our bones: if everyone’s in charge, then no one’s in charge. And how does that make us feel? Anxious. Because humans don’t fare well when no one’s in charge. The void must be filled. So now in lieu of God, we find ourselves subject to the worldview of whichever ambitious god-wannabees clamber to the top first. Or we ignore our true selves trying to be one of them, creating even more anxiety and disorder.

Enter the smart phone and gaming and Facebook and Tinder and Snapchat and a few thousand new apps a week, all to help us cope with our anxiety or our quest for control, and all drawing us every further in on ourselves (just a few more minutes) and away from the needs of the real (and often demanding) others in our midst.

This is the just one of the faces of sin lived out in the 21st-century. And we don’t need a preacher or a Bible or a church to see it. Because we already know. It was, in fact, written on our hearts (Jeremiah 31:33) and our clenched spirits testify to it everyday: the more we turn in on ourselves to increase our sense of control or avoid our myriad sufferings, the more we become a slave to that seeking and avoiding.

John speaks of this slavery when he says that, “everyone who sins is a slave to sin.” (John 8:34). Peter reminds us that, “people are slaves to whatever masters them” (2 Peter 2:19). Paul spells it out even more clearly, “I am of the flesh, sold into slavery under sin. I do not understand my own actions. For I do not do what I want, but I do the very thing I hate” (Romans 7:14-15). And Matthew delivers the hardest truth of all “No one can serve two masters; for a slave will either hate the one and love the other, or be devoted to the one and despise the other. You can not serve God and wealth” (or power or pleasure or any of the other false idols we choose for ourselves and then desperately turn to as if they can save us).

It is in light of this “slavery” that Jesus promises “we will know the truth and the truth will set us free” (John 8:32). That he speaks into the still, small place in our hearts, “Come to Me, all who are weary and heavy-laden, and I will give you rest” (Matthew 11:28). And that He watches over us even as we reject Him, even as we turn inward again and again and again, issuing the same invitation he’s made to every man, woman, and child who came before us, and will make to all who come after we’re gone. “Turn back to me with all your heart” (Joel 2:12). “Turn to me and be saved, all the ends of the earth! For I am God, and there is no other” (Isaiah 45: 22).

(This post was originally published as a guest blog on RJ Grunewald’s wonderful site Theology for Everyday Life).

Why Do You Think America is the Most Anxious Country in the World?

I explore the possibilities this month on Theology for Everyday Life.

It’s the hardest thing in the world to do. Listen. Just that. Just quiet our own mind and hurts and distractions and points of view and listen. Metaxu. This work of art—which bears that title—was done by an artist/scholar/professor I met at a conference in 2001 or so. Her haunting images never left me. And so when it came time to publish my Master’s thesis work as a mainstream book, I knew whose work I wanted on the cover. Dr. Erica Grimm, to whom I had not spoken in over a decade, gave me a wholehearted “yes” in under an hour. God has His own timetable for connecting the dots of our lives.

Man Turned in on Himself: Understanding Sin in 21st-Century America launched on Kindle today. Tomorrow there will be a three-day FREE download period in anticipation of the paperback release next week. If you’re inclined to know more about what it means that man—as in all of us—turn in on ourselves, and the cost we all pay as a society for our hyper-individualistic-and-now-exceedingly-anxious-apathetic-and-tech-addicted-culture, you might want to give it a read. If nothing else, may this image—Listen—stay with us as we interact with loved ones, neighbors, co-workers, and may Grace give us the courage to break through our self-erected walls and begin to heal.

In the desert of the heart
Let the healing fountain start,
In the prison of his days
Teach the free man how to praise.
——W. H. Auden 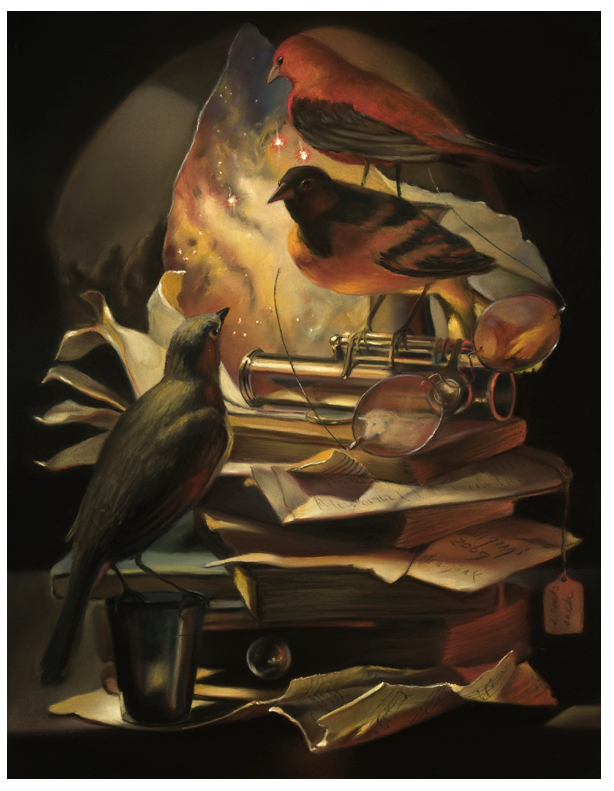